We are now mask-optional for patients, staff and healthy individuals. Our staff will mirror patients who mask, and we are happy to wear a mask if requested. Please reschedule your appointment if you are experiencing respiratory illness or COVID-exposure. Click here for more information.

Meet the experienced and friendly doctors and staff who make Sisson-Boyer Eyecare the leading provider of vision care products and services in Newport. 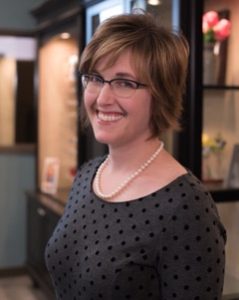 Dr. Boyer joined the practice in November 2004 and became a partner at Sisson-Boyer Eyecare in 2009. She is very proud of the new office at 300 Bretz Court. Dr. Boyer provides family vision care with an interest in contact lenses, occupational lenses, and ocular disease. She obtained a bachelor’s degree in Biology from Millersville University in 1997, graduating with cum laude honors. Dr. Boyer attended the Pennsylvania College of Optometry and gained her doctorate in Optometry in 2000. She then traveled west to complete a one-year primary-care optometry residency at the Crownpoint Indian Hospital on the Navajo Reservation in rural northwest New Mexico. Following a year in private practice in Santa Fe, Dr. Boyer returned to Pennsylvania. She was awarded the Central Pennsylvania Optometric Society “Young Optometrist of the Year Award” in 2004 and the “Optometrist of the Year Award” in 2013. Dr. Boyer is a past President of the Central Pennsylvania Optometry Society, and she continues to be very involved in her local and state professional organization. Dr. Boyer was appointed by Gov. Tom Wolf to the State Board of Optometry in January 2018 and will serve a 4-year term. She is an organizational leader in the Kistler Clovers 4-H Club. She and husband, Jamie and daughter, Lizzie reside in Blain. She loves living in beautiful Perry County. 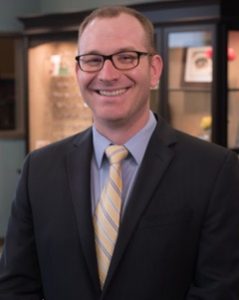 Dr. Walter joined the office in September 2012. He provides primary vision care with a special interest in ocular disease and contact lenses. He graduated from the University of Pittsburgh at Johnstown with a bachelor’s degree in Biology in 2003. Dr. Walter then attended the Pennsylvania College of Optometry, during which time he interned at Sisson-Boyer Eyecare. Upon completion of his doctorate in Optometry in 2008, Dr. Walter practiced primary care optometry in Memphis, Tennessee for the next four years. Dr. Walter resides in Marysville with his wife, Julie.

Sue has worked in our office since 2000 as an Optometric Assistant. She is involved with patient pre-testing, visual fields testing, eye wear dispensing and contact lens training. She also manages our office during evening hours. She and her husband, Ron, a warehouse product distributor, are avid Penn State football fans. They are both active in the local chapter of Ducks Unlimited. Sue enjoys gardening, hiking, swimming, baking, canning and spending time with friends.

Deb joined our team in 2020 and is our lead technician, she does preliminary tests, prepping each patient to see one of our Optometrists. Deb is born and raised in Perry County, she enjoys being outdoors and spoils us with her delicious baked goods.

Sherry joined our team in 2013. She assists patients with choosing eyewear in our dispensary and also assists with pre-testing. Sherry lives in Millerstown with her husband, Tom. She enjoys softball, the beach and all 13 of her grandchildren.

Summerlee joined our team in August of 2018 bringing with her over a decade of optical experience. She is a proud second generation optician after deciding to follow her father’s footsteps to become an Optician in 2007. She loves to help choose eyeglass frames but specializes in troubleshooting and repairs. Summerlee has been Certified by the American Board of Opticianry since 2009. She lives in Juniata County with her husband, Kyle and young son. She enjoys reading, crafting and shopping!

Ashley joined our team in May of 2018 as a Front Desk Specialist. She’s involved with helping run the Front desk, such as checking in and out, scheduling patients, fielding phone calls, and helping pre-test patients as needed! Born and raised in Perry County she grew up in Landisburg, and after attending Shippensburg University moved back home. She is happily living in Loysville with her wonderful boyfriend, Brad and two beautiful girls! She enjoys spending time racing, reading, and spending as much time with her family and friends that she can!

Morgan started working at Sisson-Boyer Eyecare in 2020. She works at check-in and also assists with clinical testing, running visual fields and retinal scans, and pre-test. She has experience working in healthcare and prides herself at giving excellent customer service. She enjoys the outdoors in Juniata County where she lives.

Melissa joined our team in 2018. She works in the billing office. She lives in New Bloomfield with her husband Keith and their rescued Shar-Pei. She enjoys traveling, kayaking, fairy gardening and hiking with her dog.

You can schedule your next appointment with us online!